You’re never going to get this kind of experience in Manhattan. Never. I start this Brooklyn adventure with a relatively quite me, in my living room, having two Grey Goose (super-dry) martinis with my favorite Cabot’s cheddar cheese and Keebler’s crisps. I’m a diabetic, don’t you know. So it’s low carbs and good tasting. Thank god Grey Goose doesn’t fuck up my blood glucose levels.

Then on to meet my BFF (I should stop with BFF stuff. I’m fucking 74 years old!) Bill at Café Steinhof’s . The only Austrian comfort food restaurant I know of in Brooklyn for Chicken Paprika and a beer. Yah, I know Chicken Paprika is Hungarian, but they serve it there and it’s delicious. Check out the lighted window in the image below. What goes on in that place? Ring the bell and a dime bag is tossed out the window? 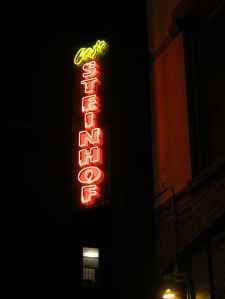 Then on to barbes on 9th Street and 6th Avenue in Brooklyn for a band that Bill likes named Slavic Soul Party. I love this bar. It is one of Brooklyn’s secrets. Check out their calendar for all the different types of bands that play here.

I order a Stella and watch the band come into the backroom one at a time. The band members look like ordinary guys, nothing crazy about them. Two trombones, two trumpets, a huge shiny tuba for Christ’s sake, a snare drum, am accordion, and a wild haired blond guy on base drum and cymbal. I order a Jameson’s to juice myself for this band. Maybe two. 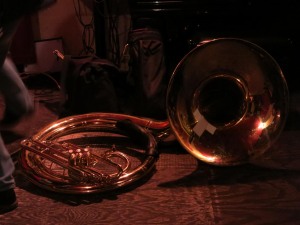 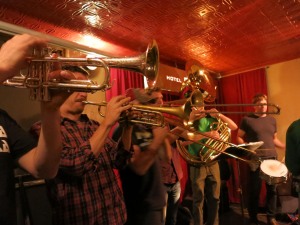 The band starts the first of three, two song, 40-minute sets. The second song lasts for about thirty minutes. It is an insane jam that boils on and on. The snare and base drums drive them. A frantic beat. Not a guitar can be seen within blocks of the place. How these guys survive in a world of guitars and sparkly drum sets is beyond me. The ten-dollar cover hardly gives them subway money. They sound like some kind of combination of a Tijuana Mariachi band, Gypsy sounds, a New Orleans brass band, techno dance funk, a hint of high school marching band, and some kind a crazy Serbian wedding band. My god, it was great. No,… impressive. No… more than that. Certainly great! And such a pleasure to listen to. The band smiles while playing and the crowd smiles while listening.

The crowd for this band is not your typical young rock and roll youth group dousing themselves with cheap beer and Jagermeister. This group seemed more worldly, very white, yet still willing to sway and dance to the complex beat. 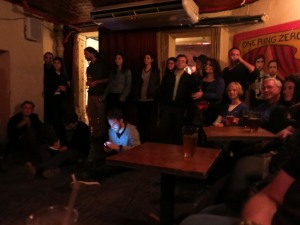 A sax player shows up to wail like Ornette Coleman. The trombone and trumpet players are on fire. The music is 40 minutes non-stop driving blarefest, vaguely related to Duke Ellington. Or at least that’s what the bandleader Matt Moran tells us. And all of this in a crowded room no more that 20 by 40 feet. Jammed in to the banging pulsing music. An endless jamb that spins the room into ecstasy driven by the snare and base drum players who seem crazed in a grove that they couldn’t stop.

Matt Moran, apparently a manic Irish guy obsessed with this type of driving music, leads them. Moran beats the base drum, dances in the audience, and drives the band forward along with Chris Stromquist on snare drum. The rest of the band is also superb including trombonist Tim Vaughn who caught fire during one of the songs and almost exploded with a jazzy solo.

It’s over and I step out into the Brooklyn night. It is still early, only 11, but I need to go home. I’m off to the gym tomorrow morning to help keep me alive so I can do this again. It is quiet on the streets, only a stray dog-walker and late night workers also going home. I love Brooklyn.

Posted in Nights in Brooklyn